I recently invited to teach a free  coding for women workshop in Sydney (Australia) as part of a festival. Im interested in teaching gender specific classes , I’m a vocal campaigner for women in all stem fields but  Im also aware of the barriers to entry  my gender provides.

The workshops were fun, my experiments worked well and  clearly I got some women coding both html and css and enjoying it.  however wanted to describe some random male responses that happened on the day because they remind me why I loathe my industry or some of the humans in it at times. I’ll just state that I pass as female , 40 something artsy & geeky.

Pre workshop conversation “yeah I’m teaching a workshop on coding for women ”
gentle conversation  about code ensues  he codes, of course so we establish the what do you know pecking order bs.. where I establish that yes actually I’m pretty well over qualified to teach a free one and a half hour course  and yes of course  I already know that markup isn’t a “proper” coding  language but  that I’ve selected it as a good place to start for learners.  (ho hum…  )s..

dude1 :so what strategy  are you using  to specifically gender teaching code women ? (cause i’m interested )
by this stage I’ve already pegged him as somewhat passive aggressive and  yet another  male whoo is  younger than me that thinks he knows better  so rather than engaging in what would be a huge can of worms I toss him a throwaway line.

thisunit : I brought cupcakes.. they are red velvet

dude1 : mutters something about me bringing all the stereotypes …..

I shrug  I’m nether willing to be challenged on my coding qualifications nor my ability to teach other females.  I offer the obvious

thisunit : What can say ? I’m cisgendered female……. I guess its my privilege…. can’t win….

Conversation ends at this point  he has no idea of the existential angst and process I’ve gone through to be at this point he’s part of the problem. He’s not actually interested in what barriers may prevent women from coding  he’s looking for easy answers. I have a different understanding of how my gender is coded to him for me its quite complicated. Gender is performed but its also a construct programmed into me that I fight with. the construct of my gender tells me daily that other people (probably men) are better at everything than I am. The construct of my gender is like acid to self esteem and it is constant  and supported by real life experience.

attributes  = “blonde ,  20 something ” ; attitude = “Im a real programmer”  ;
dude 2 just sits in on the class – smirks a lot  – takes over a female students learning as his personal project teaching her something entirely different.  I’m possibly supposed to thank him for his mansplaining  I saw him showing her sass which is probably not where I’d start a beginner.. but hey what would I know its only my workshop …
I wonder if other women would be that rude..

Dude3 is teaching the next workshop on  internet privacy  leans over my shoulder looking at the html I have scribbled on post it notes he says :

Dude3: “oh html 5,  i’m just checking to see if you’ve kept the  presentation seperate from the structure you know proper css and stuff…”
I grumble a  reply to him and pack up my notes clearing away my workshop …now your going to say #notallmen  in code are dicks and sure I’ve met and worked with some male gendered humans who are for the most part not gender biased at all.  However these three responses in less than 3 hours remind me my industry has a lot to learn to be even vaguely appealing to any  female gendered person who is sane..
<<————————————————————————————>>

While code may be not gender biased the people who do it still are.  Its enough to battle the imposter syndrome and come out as a female who codes let alone a queer one. Without being challenged in every other sentence by male programmers who may have a very poor perception of how gender and privilege work in there favour. Not to mention the it professionals who don’t bother to ask what your qualifications are but assume they know better anyhow . It’s even more annoying when they are children and you were probably producing websites when they were potty training.  It’s really no wonder the women not only don’t  seek stem jobs but also leave them as they grow tired of the constant bs and weirdness.  In other industries and if your male  age and experience  count for something.

Anyhow I really enjoyed teaching  the loverly women and some guys who came to the workshop. Hopefully I’ve made it easy for them to play with some code even if it’s  “only mark up”and they are only women.. and I’m only playing

*gets up on soap box*
Are women under represented in tech.. lets play a little game in google to see
*apologizes  feels shes an imposter, feels she has no right to speak mumbles incoherently*
I’m trying to connect the dots but they are all to far and wide, seemingly random I can’t see how the nodes interrelate and therefore can not make a coherent or logical argument .

I started to write about open source sexism,  sexism in tech /it industry – And realized I cant speak for the masses  I can only vent my own frustrations.  I am currently what we call in the industry  a  “freelancer”  that is  I have no permanent job, to some degree this suits me down to a tee. I’m to much of a psychopathic bitch to ” work in a team”.  I like working my own hours  but  I’ve been  applying for   “real jobs”  lately and there are a few things that really bother me.

The look
So for guys its perfectly appropriate to wear a suit to a job interview easy expected  for women not so much we fall here into some black hole of what is fashion and the expectations of  “power” females  : high heels  tight skirt. Neither of which are necessary to do a decent job of coding .  The expectation is that one will be  above all corporate looking.
for the employer  there expectation of  “hot shot programmer” and my physical reality don’t mesh.
*inevitable failure is imminent*

Reasons : cultural expectation lets have a closer look at that shall we
lets do a visual sampling of the imagery we use to represent programmers
Method : go to google type programmer look at images..
OK , here’s my result : 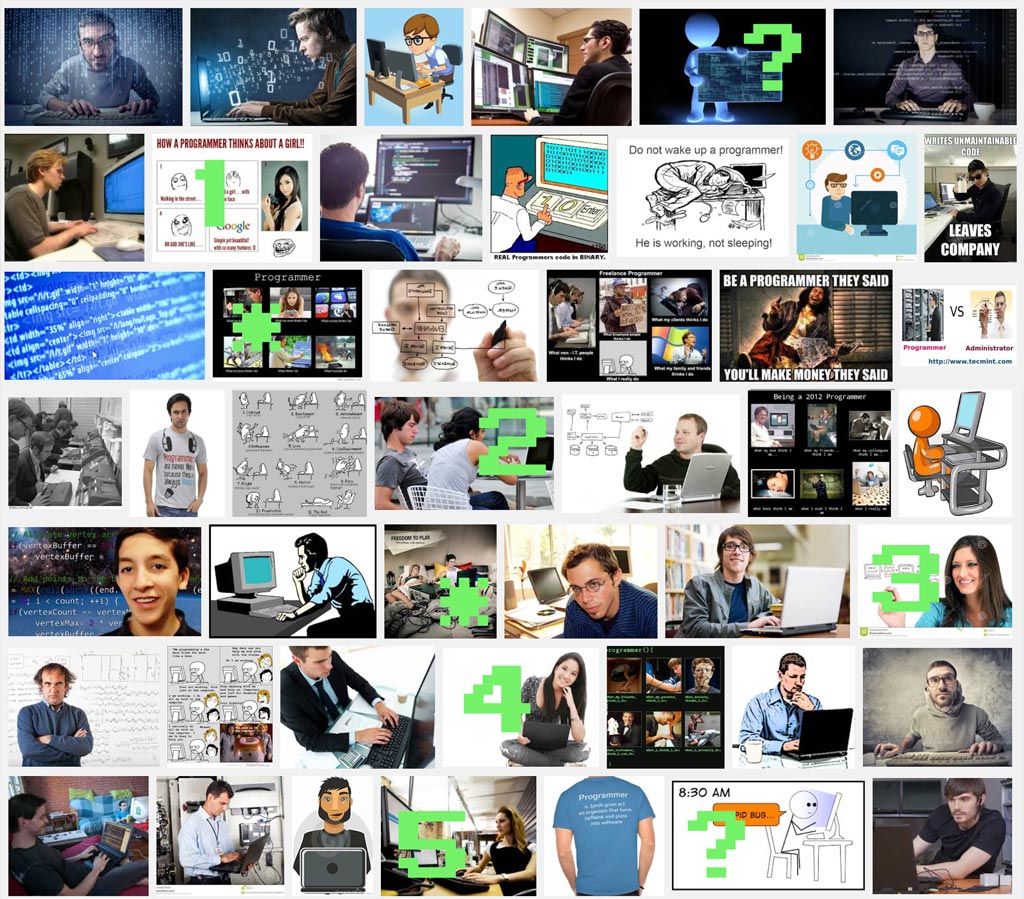 so some basic math ?

out of 47 or so images  there are :
3  or 4 which are “gender nuetral” sorta.. (I’ll count stick figures as that to be fair)
7 which have pictures of actual females..
3 of which (*) I’m going to not count cause a the female is not programming shes playing an x box , the female is not programming shes in bed with a guy with a bunch of computers and worse number 1 which is all about how programmers see a girl…
a) assuming all programmers are male.. that is  and the girl is like the sleek code of google unobtainable but beautiful.. (fell free to wretch..)

We should probably do better than this don’t you think ? 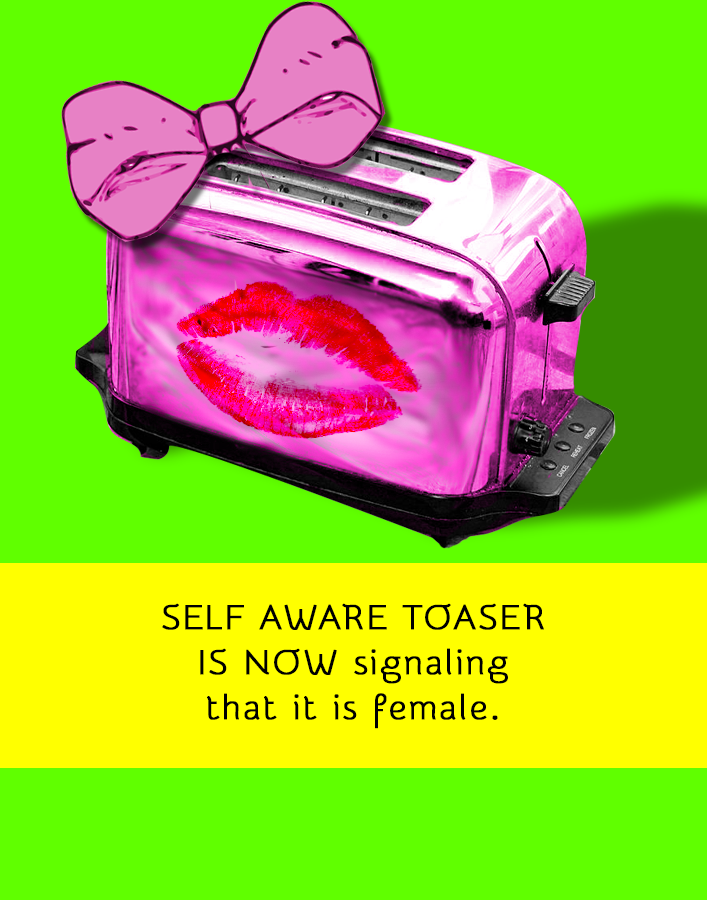